On Sunday-evening, our national team played the second game of the Eurobasket 2025 pre-qualifiers. After losing in Albania on Thursday, Romania was the guest in Kirchberg (Coque) on Sunday. The final score was 70:73 in favor of the guests, another close defeat. Luxembourg played a very strong game and showed amazing fighting spirit over 40 minutes, this performance was clearly an amazing sign for our team moving forward. Ken Diederich said after the game that this performance is „another result of the positive winning culture that the team has built over the last years. »

Just like on Thursday, Luxembourg has a perfect start scoring after 3 seconds (video) and the FLBB-squad took a 10-point lead early. Led by a strong Alex Laurent, Luxembourg was able to bring energy into a crowded arena (1113 tickets sold). Romania showed a reaction in the second quarter, played with high intensity and looked for advantages with their strong players under the baskets. The guests were able to turn the game around in the second period and led 44:40 after 20 minutes. Clancy Rugg received 3 early fouls and played only 8 minuts in the first half which hurt Luxembourg’s inside presence. Kovac had a nice scoring run hitting 3 straight 3-pointers in the second period to keep us in the game.

Afer a strong third quarter Luxembourg went into the final quarter tied at 58:58. In a very intense and thrilling fourth quarter, Romania hit key shots in the final minutes to take a small lead. With 4.3 seconds remaining, Luxembourg, down by 3 points, had a timeout and the ball. Alex Laurent had a last chancd to tie the game but it was just off (video).

All 5 starters of team Luxembourg scored in double digits, but the team only had 3 points off the bench on this night. Alex Laurent led Luxembourg with 19 points. 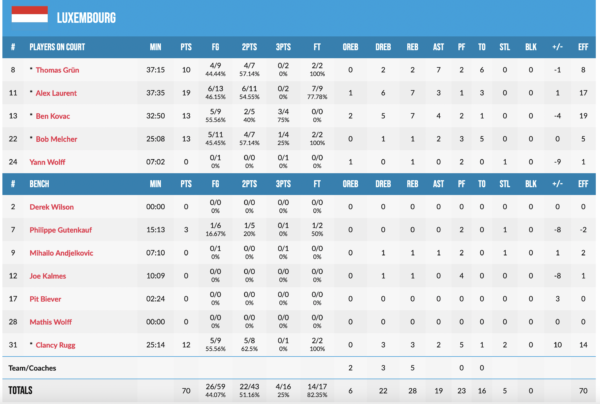