On Thursday evening, our women’s national played the third game of the Women’s EuroBasket 2023 qualifiers at home in Kirchberg. In front of 643 supporters, the FLBB squad started well and had some good stretches, but the guest from Slovakia were too strong and finally won the game 57:77.

Luxembourg started the game with a lot of energy and jumped out to take a lead at the end of the first quarter (19:10). Etute (14 points, 11 rebounds after 20 minutes) was untoppable, Mreches and Jablonowski made shots and Slovakia was forced to react in the second quarter. The guests won the second quarter 26:11 and led the game 36:30 at the break. All in all, Luxembourg played a very strong first half and was able to challenge the opponent in the first half.

Slovakia started the second half with a series of 3-pointers and extended the lead to over 15 points in only 4 minutes of game action. Led by Etute, Luxembourg reacted and managed to keep attacking the guests. The FLBB women were able to keep the deficit around the 20-point mark and played on even level for most of the game.

The next game will already be played on Sunday in Switzerland (17:00). The performance of Luxembourg on Thursday definitely gave the team confidence to try and grab a win on the road. 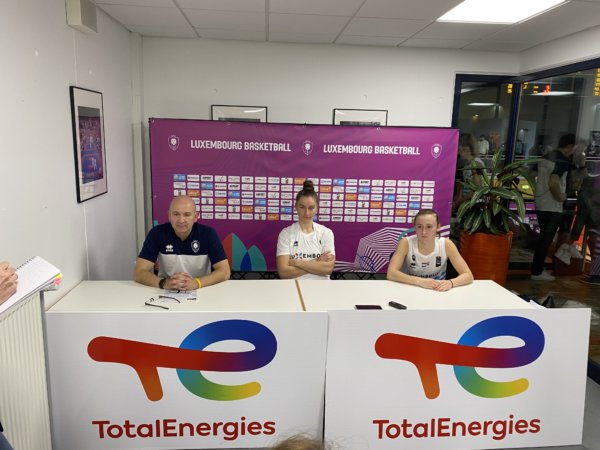 At the press conference after the game, Mariusz Dziurdzia, Catherine Mreches and Esmeralda Skrijelj spoke to the journalists. All in all, team Luxembourg was proud about the performance of the team, even if you can never be satisfied after losing a game. The focus is now on Switzerland on Sunday, an opponent that is beatable if the FLBB squad can play another good game.