On Tuesday-evening, Luxembourg played the third game of the second round of the pre-qualification tournament against Portugal. After a clear defeat 2 days ago against Sweden, the FLBB-squad was ready to bounce back. The team had a great first half and it was a very close game at the break. Portugal built a lead after the break but Luxembourg fought back in impressive manner and the game was not decided until the final minute. In the end, Portugal won the game 80:74 despite a very strong performance by our national team.

Luxembourg started the game with an enormous focus on both sides of the court. The players took the physical challenge in defense as Portugal was looking to use their advantage inside. Luxembourg led 19:17 late in the first quarter and had some nice plays in offense.

The team of coach Ken Diederich showed ist strenghts, they played collective basketball, fast and they showed emotions on every play. Portugal’s head-coach did not seem satisfied and that was a great sign for the underdog Luxembourg. The FLBB-squad took a 44:38 lead just before the break. Unfortunately, Portugal finished the half with a big run and led 48:46 after 20 minutes.

In the third quarter, Luxembourg did not score a point over the first 6 minutes and Portugal went on a 9:0 run. However, Luxembourg stormed back with a layup by Grün and a 3-pointer by Melcher and stayed in reach. After a nice pass by Kovac to Kalmes (video), Luxembourg only trailed by 4 points.

Portugal took a 12-point lead in the 4th quarter and it looked like the game was decided. However, Luxembourg showed great fighting spirit once again reducing the deficit to stay in the game (69:75 with 2 minutes remaining). Melcher hit a 3-pointer to reduce the deficit to only 3 points with 1 minute remaining (video). Portugal managed to come up with a 6-point-victory. 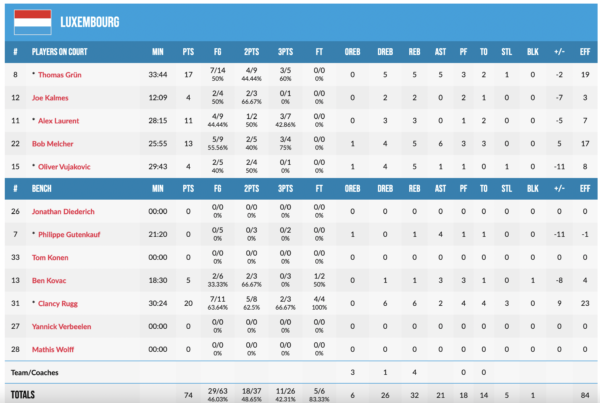 On Wednesday, Luxembourg will play the 4th and last game of the tournament against Sweden at 19:00.