The men’s National 2 is in the middle of the second round of the season. This weeekend, the 10th game day is being played.

On Saturday, a new season high in total points was scored in the game Kordall Steelers – BC Mess, the guests won this game 116:107 in overtime. League’s top scorer Barkley scored a new personal season high 53 points but it was not enough as Mess took the win on the road. Coleman led his team with 36 points while league’s leading JICL scorer Maxime Sunnen scored 23 points and Yorick Melchior added 12 points for the guests. Mess has won 4 out of 10 games this season, in order to make a run at the top 3 places in the standings, the team needs to continue to upset the best teams in the league over the next weeks.

Avanti Mondorf stays in an interesting position in the standings after their 86:76 win over Black Star Mersch. Small had a game-high 31 points (including a big poster dunk –> video) while Figueiredo added 14 points. Hassan scored 33 points for the guests that have still only won 1 game so far this season. Mondorf has won 6 out of 10 games and remains in a good position to fight for the top 3 spots. Mersch was coached by Rainer Kloss, who came out of retirement already last week, and replaced Denis Profico.

BBC Gréngewald won a key game over Zolwer, the final score was 75:68. The guests played with only one professional player, Council led his team with 25 points while Gilles Weis added 19 points. 4 players scored in double digits for the « greens », Overwater (21), Henkel (19), Barnes (13) and Breuskin (11) as the team of coach Alex Pires stays on top of the standings with 8 wins and 2 losses.

On Sunday, Mamer hosted Bascharage as the hosts added 2 new players to their roster with Bedirhanoglu (38 points) and Marcus Thomas (4 points). The guests won the game 86:81 behind 40 points by Scott Morton, but MAmer showed that the team should be much more competitive from this game on. Ndiaye added 27 points for Bascharage to secure the win. 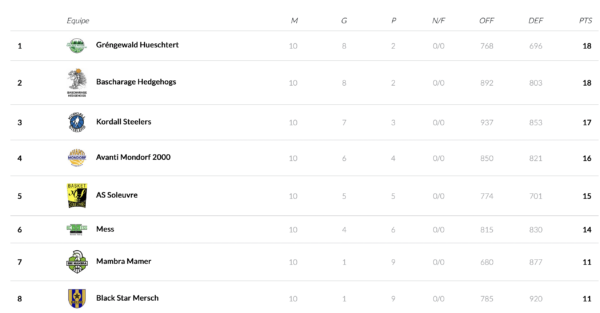 In the standings, a duo is on top of the standings with Gréngewald and Bascharage while Black Star and Mamer remain on the bottom with only 1 win.