On Thursday-evening, our men’s national team played the first game of the 2025 Eurobasket pre-qualifiers on the road in Albania. After a hard fought game, our national team just lost this game 89:92.

Luxembourg had a perfect start into the game: Kovac dunked the ball after 3 seconds (video) and Laurent finished an alley-oop dunk the next offense. However, Albania hit a lot of outside shots in the first quarter and had a small lead after 10 minutes.

The FLBB-squad had problems to score the basketball in the beginning of the second quarter and Albania took a 10-point-lead. However, our men reacted strong and cut the lead of the hosts to just 2 points after 20 minutes. Clancy Rugg had 21 points at the break for team Luxembourg.

In the third quarter, Luxembourg caught fire from behind the arc. Grün scored 3 straight shots from outside at one point in this quarter and Luxembourg took the lead (74:68) to start the fourth quarter.

It was a thrilling final quarter, the score was tied at 84:84 2 minutes before the end of the game. Albania hit 2 key 3-pointers to take a 6-point-lead with 30 seconds remaining. Luxembourg had a chance to tie the game but missed both outside shots (video). 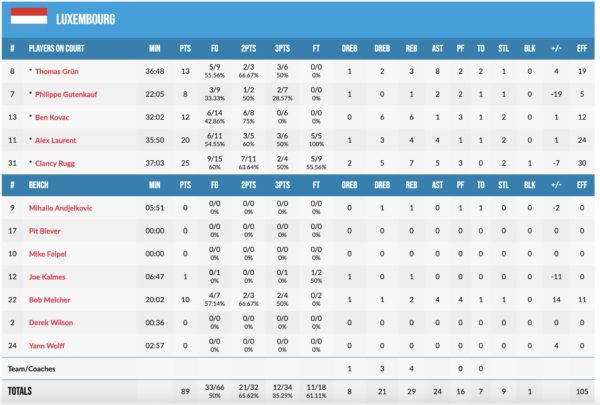 Notes:
– Mike Feipel missed the game because of a sprained ankle
– The second games will be played on Sunday against Romania at home –> Luxembourg – Romania 28.11.21 – ticket presale is open
– full game stats –> boxscore Albania – Luxembourg